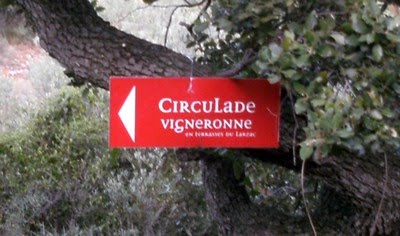 The Terrasses du Larzac Circulade Vigneronne is now a regular fixture for the first Saturday in July but this year was our first attendance. St Jean de Fos, with its backdrop of Larzac foothills, was host village for this year’s bash.
The event is seriously popular and only early departure slots available a couple of weeks out. Arriving at the departure gazebo at 16:40 we were issued with various essentials – nice hat, glass, menu and guide, pencil, cutlery, neck pouch and breathalyser kit. We’d heard stories that food had run out the previous year, so an early start seemed a good idea in that respect, but it wasn’t ideal for the chaleur.

The organisation turned out to be exceptional – excellent signage, grass cut to cross fields, lollipop wardens at road crossings, handrails erected for the odd stony section, plenty of drinking water, tables and chairs laid out – the list goes on. To combat any food shortages due to greedy attendees a voucher for each course was needed.

The format is to walk a kilometre or so to reach a pleasant spot such as an olive grove where a field kitchen backed by a number of vignerons await. Stay as long as you like and then move on. Over 40 (more than half) of the Terrasses du Languedoc producers were represented, the deal being they could only show one wine. That wine had to qualify for the AOC (now AOP or whatever) regulations, sad evidence that reform is needed urgently.

Being well over 30°C and breezy it was more an occasion for overall wine impressions rather than definitive note taking.

We started with a rosé from Domaine La Croix Chaptal 2009. Made “the old fashioned way” with much riper grapes than would be suitable for making red. The result is a nice chewy rosé with cool soupy fruits. Made a note to seek out and try a bottle.

Of the four whites sampled the pleasant surprise was Château de la Devèze Monnier 2009 Blanc. Pointing out I’d never heard of the place, the explanation that 75% of production is sold at the cellar door accounted for the low profile, as did being sited beyond Ganges north of Pic St Loup. The vineyard grows a menagerie of varieties but this Roussanne and Marsanne blend is aromatic with a nice integrated citrus zip.