If you’re in Paris, you still have time to check it out…It’s also in celebration of World Biodiversity Day which was Saturday.

Thousands turn out to see a Green Champs-Elysees

One of Paris’s main thoroughfares, the Champs-Elysees, has been covered in earth and turned into a huge green space in an event staged by young French farmers.

They want to highlight their financial problems, caused by falling prices for agricultural produce.

Plants, trees and flowers were brought in by lorry overnight to transform the avenue into a long green strip.

More than a million people are expected to visit over the next two days.

The event, which cost 4.2m euros (£3.6m; $5.3m) to stage, has been organised by the French Young Farmers (Jeunes Agriculteurs) union over the holiday weekend in France.

It will serve as a showcase of farm production from sheep breeding to crop growing.

The union, which represents some 55,000 farmers under the age of 35, wants to impress on the public – and the government – the efforts required to produce what goes on the table.

“It’s about re-establishing contact with the public about what our profession is and what they want from it,” William Villeneuve, president of the Jeunes Agriculteurs, said on Friday. 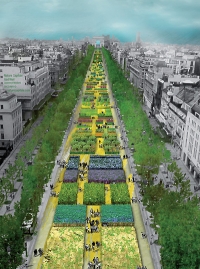 This is a hot-button issue in France right now. See what Sarkozy promised back in March.