Vancouver Island could easily be nicknamed Ceres Island. “Ceres,” Goddess of agriculture and growth, has blessed the Island many times over. For me “the island” was somewhat shrouded behind a veil of mystique. For starters, you have to take a Ferry to get over to it.  And then there were the people on the “Mainland,” that is, Vancouverites, mostly, who often refer to “the island” as a place they retreat to when life feels too fast.

Correction number one: The B.C. Ferries are more like cruise ships, with spectacular scenery, seamless drive-on, drive-off, and roomy, plentiful seating. There’s even talk of spa services being added to the on-ship diversions. 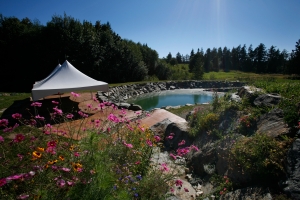 Correction number two: Yes, Island pace is a bit slower. However, when you are a culinary traveler searching out the island’s delectable gems, there’s little rest for the adventurous!

And there’s no doubt about it, Vancouver Island is a foodie mecca. In fact, another nickname, one perhaps even more fitting, would be “Island of Foodies.” And not just any foodies, Local Foodies; the island is filled with such distinctive tribes of locavore foodies, farmers, winemakers, cheesemakers, bakers and blueberry cultivators that they’ve pretty much coined the idea of “local food” and just about made it into a religion. Them and their guardian Faeries…

Little under an hour North of Victoria, in a pastoral setting nestled between Mill Bay and Cobble Hill, there is Merridale Estate Cidery.

Merridale, the first cidery on the island, is owned by Rick Pipes and Janet Docherty who readily admit that the undertaking is a “labor of love” and has been since they first bought the 20-acre property in 2000. No one else at the time was doing cider on the island. So Rick, Merridale’s cider maker, got in touch with Peter Mitchell, the U.K. -based “cider guru” to teach him some tips.

“We were lucky,” explains Marla, who also teaches a Cultivating Your Garden class at North Highland College on the island,”When we bought the farm about a decade ago, it was just about the time that there was this run on blueberries. So we quickly found ourselves sitting on a cash crop,” she says with a shrug and a smile.

Nature’s Way Farm, soon to be know as Blue Moon Farm, has about 2,000 blueberry bushes that produce about 30,000 pounds of blueberries from about 6 acres. They also cultivate an herb and vegetable garden on site in their greenhouse that Chef Kathy uses in her on-site cooking classes and demonstration dinners.

On a recent afternoon while walking the property with Marla and Kathy and meeting their resident four llamas, Kathy picked a leaf of the tender arugula and mustard greens for a sampling of the kinds of fresh ingredients she uses for her dishes. What a difference fresh makes! My eyes started watering from the spiciness of the mustard greens; Wasabi is grown fresh on the island but if you want to kick your taste buds out of this world, chomp on a leaf of Kathy’s mustard greens! 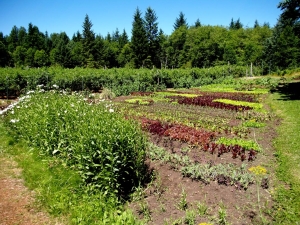 Now that Spring is warming up and summer is around the corner, make a note of these important Full Moon Feast Dates: Milk Moon, May 27; Strawberry Moon June 27; Mead Moon July 25 and then there’s Wort Moon and Corn Moon to follow in August and September respectively.