Excerpted From IntoWine.com
In 1935 the estate was rescued by an American. Financier Clarence Dillon purchased the property for 2.3 million francs.  Dillon named his nephew Seymour Weller as president of Société Vinicole de la Gironde, a position he held until his retirement in 1975 at age 83.

Under Weller, the chai was cleaned and improved and “modern” technology was implemented.  Perhaps the key stroke to restoring the estate was the hiring of George Delmas as winemaker and manager.  George retired in 1961 and was succeeded by his son Jean-Bernard who invested time and effort in clonal research.  It was his belief that great wine required different clones (strains) of each grape varietal.  Each hectare is reputed to have 10 to 15 different clonal selections.  The property is now under the direction of the third generation of Delmas, Jean-Phillipe Delmas, who has been in charge since 2003.   The Dillon family still controls the estate today headed up by Prince Robert of Luxembourg, the Président Directeur Général of what is now called Domaine Clarence Dillon SA. 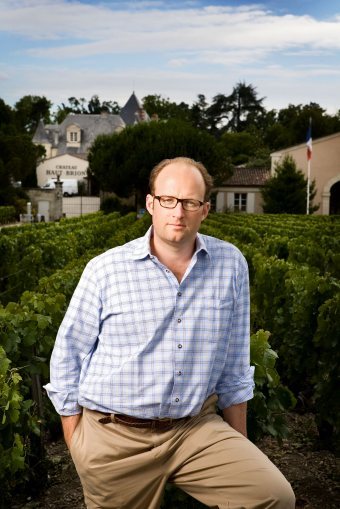 Grapes have undoubtedly been cultivated on this land since the 1400s.  By 1700 the entire estate consisted of 650 acres and there were 94 acres under vine.  Today 120 acres are planted to red grapes:  45.4% to Merlot, 43.9% to Cabernet Sauvignon, 9.7% to Cabernet Franc, and 1% to Petit Verdot.  In addition, just over 7seven acres are planted with white grapes:  52.6% Semillon and 47.4% Sauvignon Blanc.  The average age of the vines is 35 to 40 years with the oldest vines dating back to the 1930s.  The soil is Günzian gravel with some portions of the vineyard having large amounts of clay.

After hand harvesting, the fruit is sorted in the field.  The grapes are then fermented on natural yeasts in stainless steel vats.  It is a special tank that allows the fermentation to take place on the top and the malolactic fermentation to happen on the bottom.  These were first used in 1961, and although are very common now in Bordeaux, were quite an innovation.  Chateau Haut-Brion has its own cooperage for making their barrels.  The wine is then stored in barrels for two years or longer.  In the past, the wine was aged in 100% new oak, but now they use 35% new oak (25% for the le Clarence).  The white wine sees 45% new oak and is aged for 12 months.

Haut Brion is recognizable for the shape of its bottle, in use since the 1958 vintage, which are based on an old decanter shape.  The wines are made to age.  While some vintages may be delicious on release the wines really need at least a decade to show their quality.  The 1970 vintage of Haut-Brion ranked fourth among the ten French and California red wines in the historic 1976 Judgment of Paris wine competition.  I suspect that the 1970 Haut Brion, which was never a great vintage, is still drinkable and enjoyable.

Haut-Brion has been very consistent in quality over the last fifty plus years.  Like the other first growths the price has gotten silly expensive.  Yet, it often remains one of the less expensive of the first growths perhaps stemming from its location in Graves and not the Medoc.  In any event, the price is now over $500 per bottle in the recent stellar vintages of 2005 and 2009.  Perhaps better value can be found in the 2003 or 2008 vintages where a bottle can be obtained for under $300.  I have been lucky enough to try about twenty vintages of this great wine.  Personally, the best two vintages of Haut-Brion I have had are the amazing 1989 and the will-probably-be-even-better-with-more-age 2000.  Those wines are two of the most profound wines I have ever, and most likely will ever taste.  Unfortunately, the 1989 now sells for over $1,000 a bottle while the 2000 can still be “had” for around $500.

Haut-Brion’s neighbor is Chateau La Mission Haut Brion.  These two chateaus have had a historic rivalry for over 50 years.  Some say the rivalry ended when Domaine Clarence Dillon purchased La Mission in 1983.  I am not so sure.  In fact, while there is always bottle variation on a wine that old, the 1989 La Mission Haut Brion remains the best red wine I have ever tasted.  Both wines are excellent, but Haut-Brion still retains one advantage, the honor of being classified as a Premier Cru back in 1855.  READ ENTIRE ARTICLE ON IntoWine.com